Since early 2014 Major General James Cowan (aka 'General Picton') has been working on a magnificent diorama of the Battle of Waterloo. He began his monumental project as a solo effort, but more recently has been assisted in the task of painting the (now) ~30 000 1/72 miniature figures (metal and plastic from numerous manufacturers) by "contributions from UK, Europe, USA, Canada and Australia". Hats off, a huge cheer and sincere congratulations and thanks to them all!

I have been following James' wonderful Waterloo in 20mm blog about the project for most of the past seven years. He has posted regularly about his research into the buildings, uniforms and battlefield, as well as updates of the work. They have been an absolute joy to view.

A few weeks ago he posted the exciting news that the diorama will be on display at the National Army Museum in London between 20-23 October. If you will be anywhere near London during that time, get along and see it. The rest of us will have to enjoy it from a distance.

Further details about the display are available at the website of the National Army Museum and at Waterloo Uncovered.

I have included but a few photos from his blog below. Do yourself a favour and check it out from inception to near completion.

Well done to all and especially to James on his drive, wonderful painting and modelling. 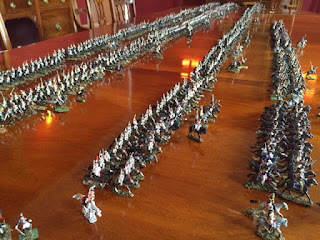 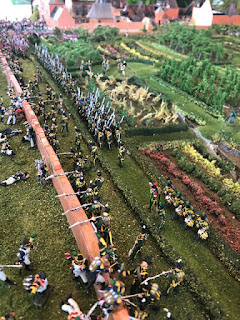