I really, really like books; particularly those about military history, most particularly if to do with the Napoleonic era, even more if about campaigns or uniforms and especially when beautifully presented, hard-bound tomes!

I have bored readers previously by noting that, if forced to chose, I'd take my books over my figures. Any time. Of course, I am in the fortunate position of not having to, so it's a bit like the 'game' of considering which sense you'd 'prefer' to lose (although far, far more trivial, of course). But then, loss of any of the senses would impact my ability to enjoy books or figures to the extent that I can at present. Enough of that digression... 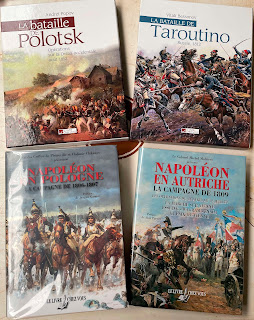 I recently had a quadruple dose of material delight when I ordered two special books, published by Le Livre Chez Vous (Éditions du Quotidien)#, which, due to an 'administrative error', became four. More on doubling later, but firstly to the two that I ordered:

(#Le Livre Chez Vous publish a range of titles, including a large catalogue on the Napoleonic period and the magazines 'Gloire & Empire' and 'Soldats Napoleoniens'. Sadly, their website has been being renovated for some months now. They provide links to resellers stocking their books, which is how I came to the shop of L'Est Républicain and these books).

The visual and tactile first impressions are sheer delight, thanks to the A4 format, heavy stock, beautiful layout and plethora of colour pictures. Examples of the latter appear on every page. The text includes a description of events of the campaigns/phases indicated by the titles with numerous quotes from eyewitness accounts (based on reports and memoirs—more on that later too). I have leafed through the pages, reading sections here and there so cannot yet comment in detail on the text. I can say that they are both well-written, in an interesting, story-telling style and in French that is easily comprehensible to me with my intermediate level.

Some sample pages from "Napoléon en Pologne" will serve to illustrate. 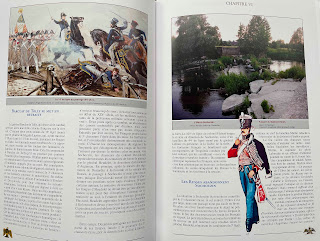 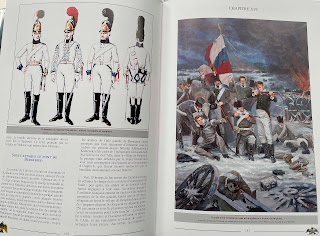 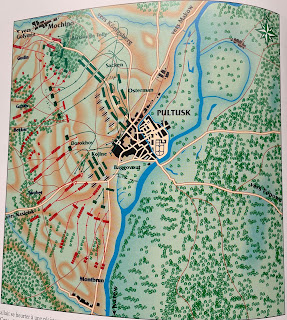 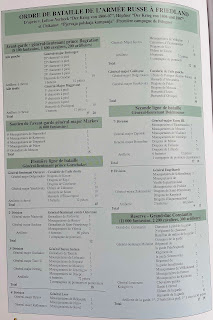 In the foreword to the book, the authors, Natalia Griffon de Pleineville and Vladimir Chikanov, note the paucity of material about the 1807 campaign in Poland. They highlight the challenge of relying on 'eyewitness' accounts that were often written long after the events and as justification for the author's actions, in the politics of the day and/or simply with the reminiscence of older age. Their approach has been to utilise official publications of the day (which also have their limitations, as they note), along with selected quotes from French, Polish, German and Russian sources. The result, from my skimming, is a rich and vibrant description that was/is a great addition to available books about the campaign prior to its publication.

The book is organised in forty, brief/shortish chapters (a format that I like as it suits my 'bite-sized' approach to reading) plus several, detailed appendices covering military decorations and awards, a reproduction of Victor Hugo's 'Cimetière d'Eylau' (his father was an officer in the French army in the time of Napoleon), place names in 1807 and today, all of the proclamations and bulletins of the Grande Armée during the campaign, the acts signed at Tilsit, bibliography and index of names. It's a beauty!

I look forward to reading it in detail.

Error in my favour

I had been interested in "Napoléon en Pologne" since first seing in on the Le Livre Chez Vous website a few years ago. It sounded great, but the list price of €145 was far outside my budget! I took the plunge when I followed the link on the 'under construction' website of Le Livre Chez Vous to the website of L'Est Republicain and saw that the price had been reduced to €45 . I enquired about it along with the volume covering the second part of the 1809 campaign. It would still be a big purchase, since postage was near the price of the books, but the description of the quality of the publications, the involvement of Natalia Griffon de Pleineville and past experience with publications for Le Livre Chez Vous convinced me they'd be worth it.

I was super excited when, early in July, just eleven days after making payment, my wife said that she'd collected a large, heavy package for me. My delight changed to confusion when I opened the package and saw neither of the books that I'd expected. Instead, two of the others that I'd considered were contained therein: 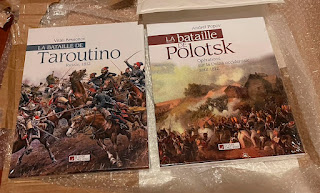 I contacted L'Est Republicain immediately. They replied promptly. The books had been sent in error. Mine would be sent to me, although there would be a delay as they were taking holidays from Bastille Day until early August. What to do with the ones that I had received?

I had not opened them (they were wrapped in plastic), as they were not mine. There was a bit of toing and froing. They offered to me to purchase them at cover price only (i.e. without the cost of postage). I thought about it, but since I had already made a big purchase I was not keen on another. So, I offered to return them if they sent me the cost of postage. They declared that the cost of returning them was prohibitive and so I could keep them. It was then that I removed the plastic covering and looked inside.

Wow! They were beautiful. Some pages from La bataille de Polotsk will illustrate. 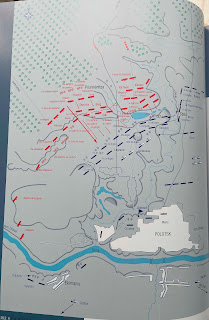 These were a real windfall and it was like that "bank error in your favour" card in Monopoly. Having opened them and seeing how lovely they were, it felt a bit strange to have received them for free. It did not sit well with me and felt dishonourable. So, I have paid for them and now feel that I have legimitate copies.

I posted on my non-Napoleonic blog about the lack of much progress with painting over the past couple of months. I expect that to change over the next two to three months, so reckon I'll have the early Austrians illstrated below, and a few others, marching out the other side of my 'active' painting queue.