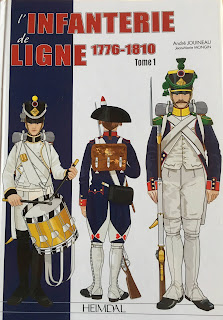 I love uniform books; especially Napoleonic and particularly about the French army (doubt that I am alone in that amongst readers of this blog). When I saw this book promoted in an e-newsletter from Éditions Heimdal it took only a quick look at the description on their website before I decided to purchase it. It arrived last week and did not disappoint.

This book is largely a compilation of material from two issues of Soldat magazine (also published by Éditions Heimdal) into a lovely, hardcover, A4 format. True to the title, the book covers French line infantry from 1776 to 1810 with about a quarter of the 160 pages devoted to  pre-1789, around another quarter to uniforms of the revolution and consulate (including the Egyptian campaign, see later) and the remaining half to those of the early to mid-Imperial period. The book is a visual feast with a plethora of pages of full colour drawings of troops in assorted uniforms. I'll summarise these later, but firstly a bit of background that may be of interest.

Readers may recognise André Jouineau's name from the marvellous, soft-cover Napoleonic uniform books that were published by Histoire et Collections. Sadly, that publisher went into receivership in 2012#. Fortunately, the void that they left was filled by Éditions Heimdal. Based in Bayeaux, Éditions Heimdal. originally focussed on the middle ages and world war two, but since 2015 have expanded their range to "... cover history from the bronze age (1800 BCE) through to conflicts of the 21st century." Since that time they have been prolific in the publication of books about uniforms, campaigns and military history, ten of them of the Napoleonic era (a trilogy about the Imperial Guard, French artillery, Dictionary of the Grande Armée, Italians of the Empereur, Swiss in the service of France, Arcole & Rivoli, Egyptian campaign and now line infantry). I recommend them all. Most are in French only, but the trilogy of the Guard, published in 2017–18, has been translated into English. For this recent book, Jouineau combined with Jean-Marie Mongin, with whom he co-authored the magnificent trilogy about the Guard.
[#Pleasingly Histoire et Collections was brought out of receivership by Sophia publications (now renamed Sophia Histoire et Collections) and has been back in operation since 2016, specialising in "...current affairs and military history, vehicle collection and vintage fashion." Their focus are their magazines: Raids, Raids Aviation, Militaria Magazine WingMasters, SteelMasters, Charge Utile, Tracteurs Passion & Collection, Figurines, GBM et Styles Vintage, but they also publish books in both French and English, including their back catalogue.]

Jouineau's illustrations of uniforms, a full 120 pages of them, are the main feature of this book. These show various units, ranks and modes of dress of the line infantry. Images are presented from front side and rear, along with detail of equipment, flags and items of uniform.

Beginning with the late Bourbon era, the initial pages of illustrations show the units that served in America in 1780. This is followed by pages devoted to the regulations of 1786. The uniforms of every unit are illustrated along with accompanying pages showing the uniforms for privates, NCOs, musicians and officers and some of specific uniform items. We then move to the republic with illustrations of each of the initially white-uniformed units, during the 'transition' from the King's army—all shown in profile across nine pages, then to the blue-coated l'infanterie de la republique. This is followed by eleven pages devoted to the special uniforms adopted by the troops in Egypt 1798–1801; a fantastic inclusion for mine. 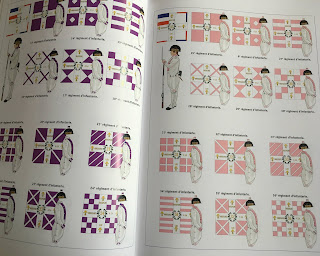 The uniforms and flags of all regiments according to the provisional regulations of 1791 are illustrated in profile. 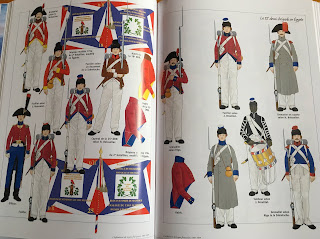 Two of the eleven pages of illustrations of demi-brigades in Egypt 1798–1801. 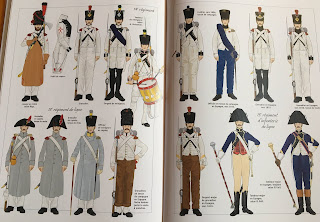 Examples of the pages showing regiments in detail; here we have the 14e and 15e régiment d'infanterie de ligne in their white uniform. 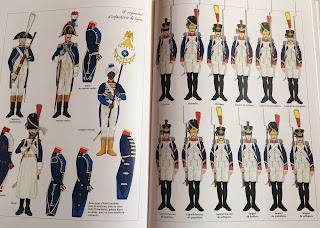 Two of the pages devoted to the 18e régiment d'infanterie de ligne. 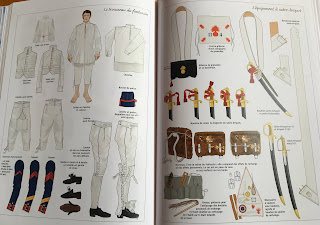 Illustrations of items of equipment and uniform add greatly to those of the troops.

Along with these beautiful illustrations, the book features 25 pages of text (in French) interspersed with reproductions of paintings of battles and illustrations of troops (some full-page), along with the bibliography, contents and publication details. The text packs in a lot of detail in support of the images including a brief history of the development of French infantry formations and organisation from the middle ages to the consulate and 1st empire. This is followed by details of the uniform and equipment of the infantry of the early to mid Imperial period, including key changes over that time. 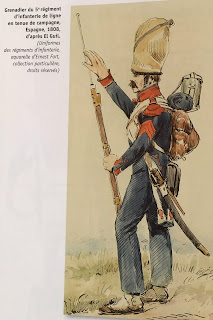 An example of one of the reproductions of paintings included in the book; this of a grenadier in Spain with covered bearskin.


This is a fabulous publication that I plan to enjoy leafing through, reading and generally drooling over for years to come. My only complaint is that I would have liked more(!)—that greedy perception is the only thing preventing my giving it a score of a perfect ten! I look forward excitedly to the publication of tome 2.

I recently 'stumbled' across André Jouineau's website, Images de Soldats which has plates of uniforms and planes drawn by him that can be downloaded as thumbnails, or purchased for 2,50 € per plate. A book is cheaper, but this could be a good way to purchase specific examples. 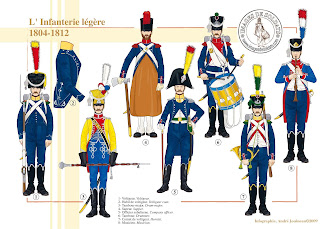 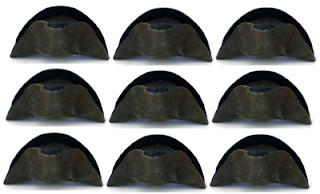