I prefer home-made scenery. It goes back to the early days of wargaming with Dad when everything was (relatively) so much more expensive so we used the small amount that we had from train sets and improvised/made the rest. Besides, it was all part of the fun. Even now, when professionally made scenery is so much cheaper I prefer the home made variety as the bought stuff, while flash, lacks character for mine.

Some old terrain squares have formed the base scenery for the games thus far at my new (as it still feels to me) wargaming shed. I want to move to using the overlay 'sheet' method—actually I have purchased some lovely, plush green stretch material which will add to player comfort, ha,ha. I was thinking about how I'd like to represent roads and rivers. Then I suddenly remembered; liquid latex.

I have a fairly large quantity that was left over from making soil peels (monliths). These are constructed by painting the stuff on the face of a soil pit. The soil sticks to the latex which is then peeled off and mounted on a board. The resulting impression shows how the soil changes down the profile and is an excellent, visual tool. Anyway, I thought that I should be able to paint the stuff onto plastic, mold it a bit, even stick things to it when wet and then paint it afterwards.

I had a test run making some items for a First World War game. I made circles to represent an explosion, the resulting crater and, what was going to be smoke for gas, but I decided would be better as a rock outcrop (not for World War I). I was pleased that it all worked. The latex peeled off the plastic when dry, assorted bits that I had stuck to it held tight and I could paint it with my acrylic paints.

Buoyed by this I decided to go into a bit of production making sections for rivers and roads. I painted various shapes on to an old piece of vinyl. I added some pieces of lichen and bits of model trees to some of the sections that I wanted to represent swampy areas around a river. 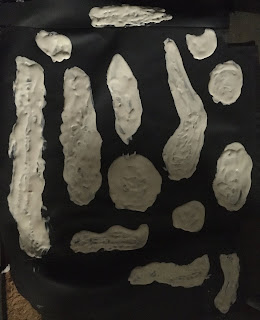 Sections of liquid latex painted onto vinyl. These are destined to be rivers and ponds. 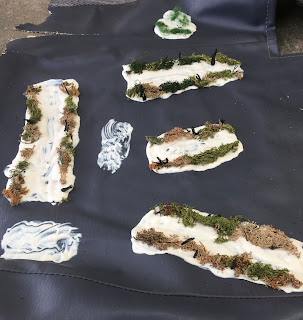 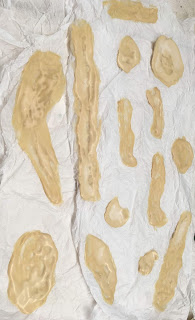 The sections once partially dry (above), fully dry (below left) and painted (below right).

Once they had dried it was a simple matter of applying paint (two coats) and they were good enough for me. 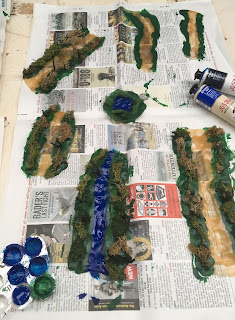 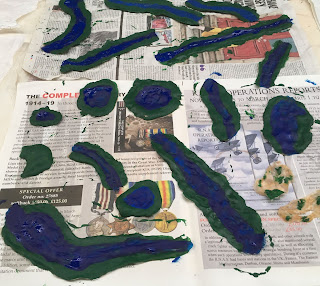 I was really pleased with the final result, particularly once placed on a tabletop. They will not win any terrain prizes but are functional and flexible. Most of the sections that have I made are quite short, so I'll now make some more of the longer ones. 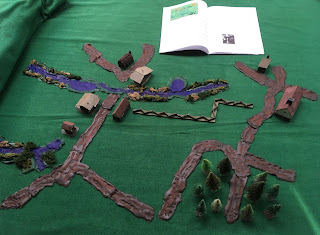 On the table-top. This is the layout for a small, brigade-scale game of "Twilight of the Sun King".