Yesterday Julian hosted a fine naval game, the culmination of months of recent planning and testing of the rules, based on the Battle of Cape Finisterre, 22nd July 1805, aka 'Calder's Action'. 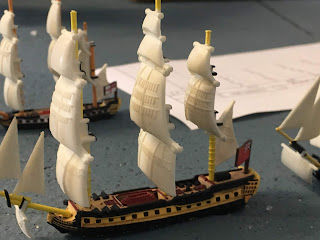 The scenario came straight out of the rule book (Grand Fleet Actions in the Age of Sail). After a bit of discussion, Julian and I decided to play it 'as given', so the English commanders were rated 'average', crews 'veteran', French commanders and crews 'average' and the Spanish command 'inept' and crews 'slack'. We had seven players with Mark H ('Marc'), Mark B (Biko), Olivier and Stephen of the NWS joining Julian, Mark (Wilko) and me. I took the Spanish as the descriptions sounded fitting!

What follows is a brief, pictorial account. No doubt Julian will post one of his excellent reports of the action in full account on our Avon Napoleonic Fellowship blog and Mark H will be posting from Villeneuve's point of view (his role), so I'll add links to those in time.
(Mark H has not done this excellent post about the game) 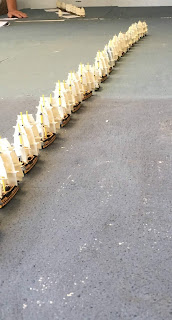 The historic action was fought in foggy conditions, so the commanders used 'follow the leader' to keep their fleets together. The fog was reflected in the scenario by the simple, but significant, effect of halving the command range. 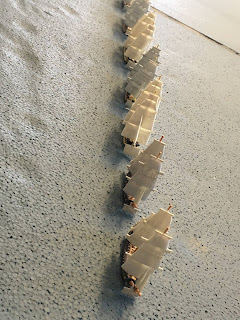 The Allied fleet with Rear-Admiral Dumanoir's command (Julian) in the van. 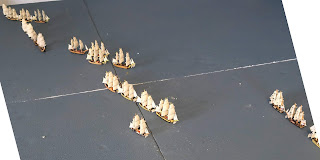 The English broke into four groups with the aim of cutting the Allied fleet in several places and defeating it in detail. Captain Gardner (Olivier), Admiral Calder (Stephen), Rear-Admiral Stirling and Captain Butler (both Wilko), from nearest to furthest. 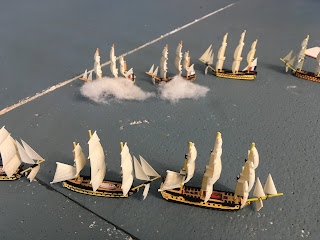 Dumanoir was first to come into action, inflicting some damage on Gardner's lead ships (Agamemnon and Hero (flag)). 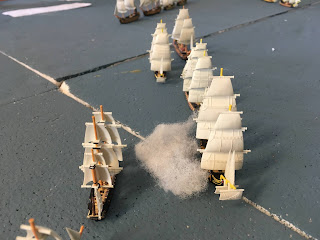 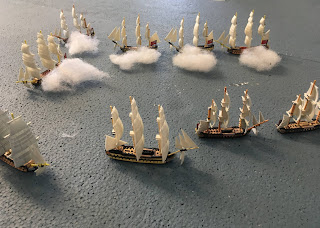 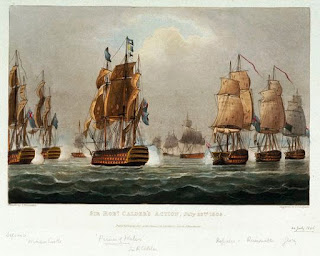 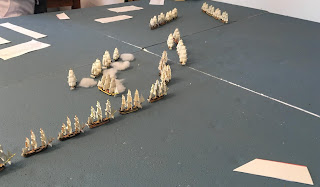 A wider view of the action around this stage (Allied at bottom-left). 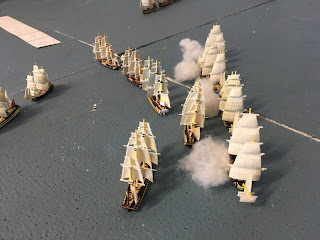 At the rear of the line, my ships were oblivious to it all. 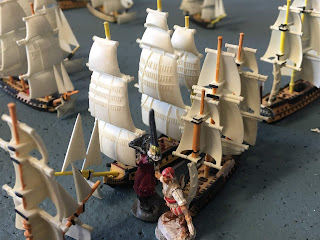 On board Hero, Gardner attempted to board one of Dumanoir's 40-gun fifth (or are they sixth?) rates. It all went to pot though (the dice were not with the English, to be sure). The English attempt failed, and Hero was captured! She was sailed away as a prize. 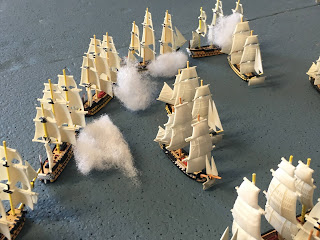 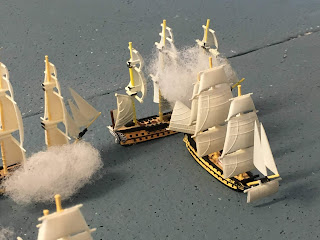 The raking shot on another of Gardner's command resulted in a test for catastrophe. 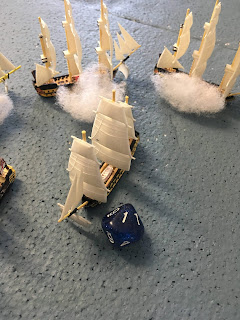 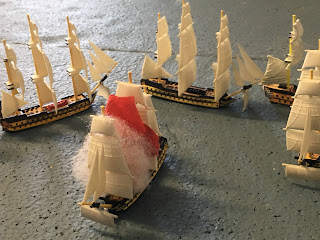 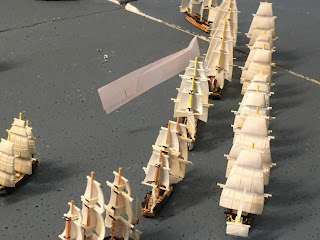 It was not all going the allies' way, Formidable, Dumanoir's flagship, was no longer so and the crew struck her colours!
(Addendum to original post: I forgot to mention that this, I recall, was as a result of our local land-lubber, Wilko, successfully executing a 'Nelson's touch' manoeuvre and breaking Dumanoir's line. He's starting to get the hang of this 'boating' lark!) 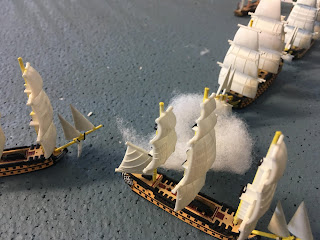 Magnon de Médine (Biko) now came into action, but his crews were not as accurate as Villeneuve's, firing an ineffective rake,... 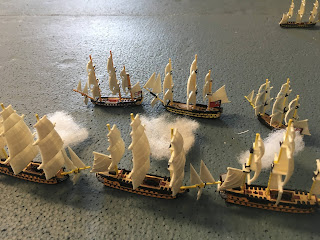 ... and inflicting little further damage on what remained of Gardner's (former) hard-pressed (and demoralised) command. 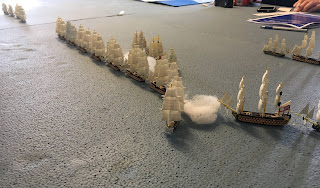 Some wider photos of the action at this stage. 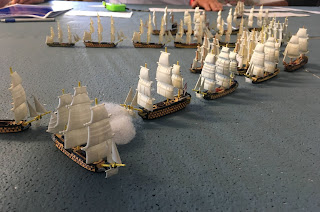 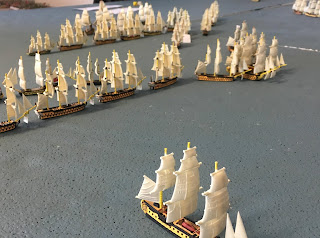 Same again, showing Hero sailing away in the foreground. 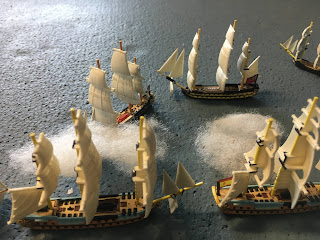 My rearguard finally came into action, adding to ex-Gardner's woes (a lucky '10' making up a lot for my 'slack' crews). 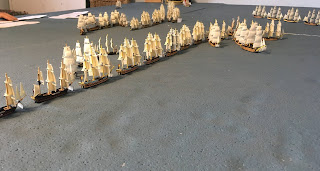 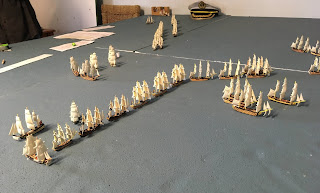 The table at the end of the game. At the top, in front of Calder's hat, Rear Admiral Dumanoir's former command (demoralised) and Admiral Villeneuve's command are making east and safety of Ferrol. The central line are Rear-Admiral Magnon de Médine's and Admiral Don Gravina's commands that seem destined to safely by-pass most of the English ships that are past them and against the wind: part of Captain Butler's command at top-right, Admiral Calder's closest to camera, what remains of ex-Gardner's ships at front-left and Rear-Admiral Stirling's coming in towards the line in the centre.

With 50%-plus of their ships exiting or likely to, the east table edge, it was a French scenario victory.

It was a most enjoyable game, looked and felt like a Napoleonic naval game, and all seven players got to move ships and have a shot or two (several more for those in the van and centre).

Well done and thanks Julian for hosting such an enjoyable game. The testing, checking and investment all paid off. Trafalgar beckons...!
Posted by James Fisher at 5/12/2019 10:05:00 am 10 comments:

Sunday, 5th May marks 198 years since the death of the Great Man at Longwood, Saint Helena after a short illness^. 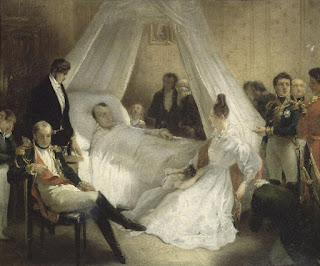 To mark this event, Pen & Sword are offering free e-books of four of their titles. Here's the note that I received from the publisher with a request to 'spread the word':


This Sunday marks the anniversary of Napoleon's death, to coincide with this anniversary Pen and Sword will be giving away four eBooks for free from Amazon. I wondered if you would be able to share this with your readers, if you are doing a post around this anniversary. It’s not often we give away eBooks for free, so I am keen to spread the word as far as possible! Here’s the four eBooks that will be free on the day and the Amazon link to download the titles. 1815: The Waterloo Campaign Vol I: https://www.amazon.co.uk/Waterloo-Campaign-1815-Ligny-Quatre-ebook/dp/B072MK79YX/ref=tmm_kin_swatch_0?_encoding=UTF8&qid=1556703709&sr=8-1

This is for Sunday (GMT) Only, so act now!

^The compelling theory of poisoning has largely been refuted, although, of course, it can never entirely be 'put to bed'. For those interested, here's a list of some of the key publications around the matter, in chronological order: