I did not think that I'd be interested in seeing the film Miniature Wargaming—the Movie, but I have gone from 'likely never' to a 'definitely want to see it'. This change came about firstly due to Keith Flint and secondly to LittleWarsTV, Greg Wagman in particular. Thanks Keith and Greg.

A recent post by Keith about the film on his blog led me to look at the review by Greg on LittleWarsTV (from January this year) and then on to the extended interview with Joseph Piddington, the director and producer of the film, in the LittleWarsTV (free) subscriber section. 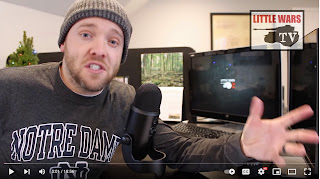 Greg's frank, detailed and considered review had me interested. He described the quality of the production, the section on the history of wargaming (a recently piqued interest of mine!), which made me think that there would be enough there to interest me. He ended up suggesting to have a look at it, even though he had some reservations about it and felt that it presented a negative image of the hobby as the three/four stories used were not particularly up-beat (to paraphrase). The interview with Joseph, particularly the full-length one, sealed it for me. Here is a genuine and thoughtful person an aspiring young producer-director (no, of course, he is a producer-director) and a passionate wargamer who has produced a thoughtful and interesting film. The target audience is the 'general public' or perhaps, in Joe's words, that friend or relative who wants to know why we do this (seemingly) strange hobby. I reckon that I'll find it interesting too, even if there will be sections that I will not relate to and/or annoy me.

I am sure that the insights from 'industry insiders' about the nature of the business, especially the cottage-industry nature of it, will have much that will be new/news to me. Further to this I look forward to Joseph's next project which will be aimed more at wargaming enthusiasts and which I, as one who generally avoids kickstarter and the like, can see myself chucking in a few dollars to help get off the ground (and paying to view it once it does). I'll keep my eyes out for further news about it.

In the meantime, I'll have to find out how I can see the film. Part of Keith's post was about his annoyance at not being able to view it yet in the UK. Sadly, there was no mention in Greg's interview with Joe about a release in Australia—nor Europe for that matter. Hopefully it will be a matter of time.

Ah time. That limited 'resource' that seems to evaporate when we are doing things hobby.

The two videos mentioned above were really interesting, but were great from another perspective. The videos being chiefly about the words, as opposed to the visual, and those words being in English, meant that I was able to get some basing of my early Austrians done while 'watching' them! Here are a few photos.

Below are some more photos of my recent hobby 'travail'. It will not look much compared to posts of past progress, but there are some changes: adding 'fiddly bits' like facing colours, and metal for muskets, but also in converting figures to use for Grenz hussars, early uhlans and Polish-Italian legion uhlans.


Julian and I are catching up for a session on the 4th. I want to have a go at the Battle of Voltri using a my first pass/adaptation of Kriegsspiel. It has been twice delayed due to 'other things' cropping up. I have been happy about that as it has given me more prep. time. I'd like to have the above figures looking a good deal like they are meant to, so at least have the base-coat done. Some more of the 'fiddly bits', some more basing and then I'll be applying white, white and more white;