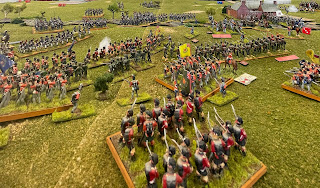 A few weeks ago John and Mitch called me to see whether I'd be interested/available to join them for a game down in Albany (at Mitch's place and HQ of the Serpentine Wargaming Club). The short answer was 'yes, provided that date 'worked'. On checking, it did, so I was 'in'.

After an enjoyable and uneventful 400-odd km Friday afternoon drive, I joined Mitch and John, along with Steve R and Steve W (who had travelled a similar distance from Perth). The other fellas had arrived before me, so all were discussing the coming game over a Friday arvo' bevy. I soon joined them. We decided on players for the coming contest. I would be French (naturellement) and would be 'joined' by Steve R., or more to the point, I wold join him as he would play as Ney as well. Mitch and Steve W. would take the Anglo-Allied. Steve W. had not played Napoleonics before, something that did not hamper him in the least.

After a meal at a pub in town, we returned to begin proceedings...

We decided on one last turn, to see whether we French could achieve some 'dernier hourras'.

What an enjoyable weekend!

The game looked marvellous, the company was excellent and beer and other beverages flowed at a steady but not crazy rate. The game was brought to a conclusion in good time (1700 on Saturday) so that we could discuss it for a while before adjourning for an excellent meal of Indian food and passively watching a mindless and silly film ('Morbius') that takes far more liberty with science and reality than we had done with history. Stil, it sucked me in, has some speccie effects and a plot that doesn't test a tired wargamer's brain much!

A giant thank you to John and Mitch for hosting the game and providing a glorioius combination of venue, terrain and figures. Special mention to John for assuming the mantle of umpire and forgoing the pleasure of pushing his own figures around the table over his excellent terrain cloths.

I have now played three games using General d'Armée— Abbach, Abensberg (north) and Quatre Bras—each of them reasonably sizeable actions (for the rules) and played to conclusion in sessions over two-days. My impressions of the rules have not really changed since I first read them; instead firming after now thrice putting them through 'contact with the enemy' (i.e. use in a game).

The core mechanics of the rules, movement, firing, charging, combat seemed pretty reasonable on reading. After three games, they have improved in my estimation to 'robust'. The same cannot be said for command and control.

When I read the rules, I struggled with Brown's aide de camp version of a 'pip' system. The line in the rules is that they 'represent command ability'. On reading, I thought, "Why have an abstract system to 'represent command' and not simply represent it directly?" After Abbach I wrote that, "There remain a few doubts in my mind regarding the ADC system,... It is possible, with more use, that this system will show itself as a mechanic that is too stylised for my liking...". I was a bit more comfortable with it after Abensberg, but this game has demonstrated to me why I 'had reservations' with an example of the worst that can occur.

So, the rules are okay from my perspective, but they are a long way from being my 'go to' set. At their core, the system works well, but the game aspects are not for me and detract from the rules as a representation of a Napoleonic battle. Clearly Brown likes this sort of stuff in his rules. I had a similar and more direct experience with General de Brigade. It was an evening game at the Napoleonic Wargaming Society. I was moving up my French force of a couple of infantry brigades and some cavalry when I rolled a 'blunder' (double one is it?). I followed this with some other pitiful roll and my cavalry about turned and began heading away from the enemy, who were a long way away and I had intervening infantry between the two. There was no cause for this in the game. It was purely some bad rolling. Such completely random aspects are not for me. If I were to have General d'Armée as my 'go to' set, I would make some fundamental changes to the system of command and control (including 'destiny'). John is considering some changes/adjustments, so I'll be interested to see how they go in the next 'contact with the enemy'*.

This was the fifth time (at least) that I have played a re-fight of Quatre Bras. I'd have to look back to count exactly, but there were four, or more, during the bicentennial year of the battle. I'd also have to look back in detail to check the results, but I recall that in all but one the French performed worse than Ney and his men. The exception was a game using Napoleon's Battles where they did decidedly better, but it took Ney's considerable (really, really considerable) bonus in combat under those rules to make it happen. I am left wondering if I can do as well as Ney, let alone better. That is a project for another time, but this game has brought it back to front of mind, so it may now be brought forward quite considerably!

There are plans for another weekend in Albany in a month or few. I look forward to it immensely. The joy of shared time, plenty of banter and laughter, enjoying the love (obsession) of the hobby with a fine group of gents far outweighs any limitations to General d'Armée (or other set of rules).

As written, the rules are for actions of division to corps size.

Minimum unit of manoeuvre is a battalion.

Figure scale can vary and was nominally ~1:25 in this game