A few months ago, I reviewed my all-time favourite Napoleonic book; The Anatomy of Glory*. It is unlikely that Lachouque’s magnificent study of this legendary formation will ever be moved from this mantle, but every now and again a book is published that threatens to do so. Paul Dawson’s new book comes close.
(A relevant aside, Lachouque’s book is on a magnificient special at Naval and Military Press at the moment) 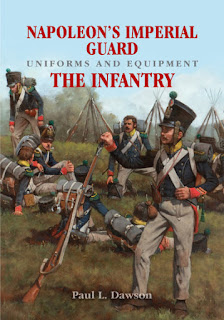 Now, you can never have too many books about the Imperial Guard(!), in my opinion, but this new tome by Paul Dawson is not another history of the units nor beautiful presentation of uniform plates. Rather, he has produced a novel and significant piece of research that is compiled into a beautifully presented book. Something that offers new insights as well as a feast for the eyes.

Dawson has combined a detailed study of the Archives Nationales and Service Historique Armée de Terre with extant uniforms and equipment from museums and private collections, as well as documentary evidence from memoirs and period artists’ representations to produce a detailed analysis of the uniforms of the infantry of the Guard—down to the piping on the lapels and stitching on the cross-belts! He uses this combined evidence to challenge some of the accepted representations of the uniforms and equipment of this most famous force, including such giants of modern Napoleonic uniformology as Rousselot, and Boucquoy, who have influenced many of the books that fill the shelves of wargamers and modellers.

The book begins with the briefest of chapters describing the formation and history of the Guard (a mere four pages). This is followed by a chapter on the organisation and equipment of the Guard infantry followed by a third, brief chapter describing the cloth and colours of the period. In the second chapter, Dawson includes important comments about the limitations of the archival records. He notes that the records are not complete for all regiments—those for the chasseurs being non-existent. He acknowledges that Rousselot filled this void with artists’ representations (such as David and Hoffmann). His own approach is similar, but focusses more on the archival material and existing uniform items, referring to the documentary and artistic evidence to complement them. His detailed and tooth-combed approach has yielded some important observations but, as he notes “We will never know exactly what some regiments wore”.

The majority of the book comprises chapters describing in minute detail the uniform and equipment items of each regiment of the Guard infantry. Dawson leads the reader through his research into the specifics and developments of uniform and equipment of each unit, complimenting his text with numerous tables and lists from the archives detailing the numbers of uniform items and materials to make them. 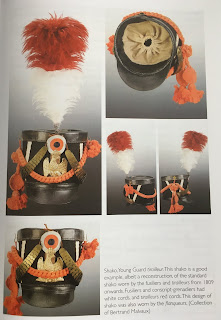 A visual feast: the book is filled with numerous plates of photographs of uniforms and items of equipment from museums and private collections, all shown in great detail and from various viewpoints. 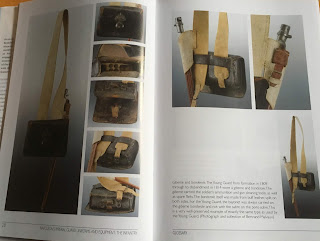 For me, the piéce de resistance of this book are the photographs of the uniform items from private collections, the Musée de l’armée, the Musée de l’Empéri, Musée municipal de Pontarlier, Borodino museum and National Militair Museum Soesterberg. These are numerous, clear and include separate zoomed photos of the detail of each item, from a range of angles. 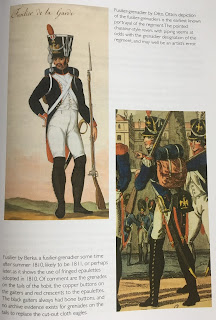 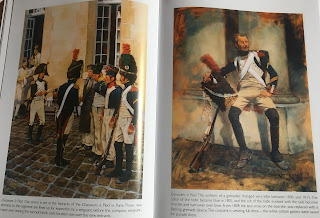 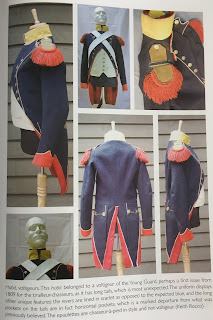 Orders articles and decrees notwithstanding, the reality ‘on the ground’ was often quite different, even amongst the privileged ranks of the guard. An example is this habit of a voltigeur of the guard, which includes epaulettes from the chasseurs. 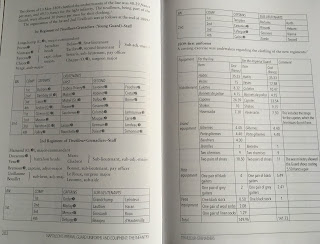 Dawson provides detailed tables and lists of information from archival documents. My one gripe with the book is that the asterisks beside the names of commanders are not explained. I searched and searched, but could not find the explanation. I suspect that they indicate those who receive the legion of honour, but it is frustrating the the explanation is either missing or buried somewhere in the book.

This is a weighty book, in all respects. Its hard-bound 475 pages are printed on lovely, heavy, gloss stock. The photographs and plates are clear and 99.5% in full colour (417 out of 419 images by my count). It is a magnificent book to own, to admire and to read through. I recommend this for your book-shelf whether to leaf through, admiring the photographs of the equipment, the reproduced prints or Rocco’s artwork, reading about the equipment of a specific unit of the Guard infantry, seeking detail to paint, or simply to know more about the uniforms of the soldiers of this ‘immortal’ formation.


I shall enjoy leafing through and ‘drooling’ over this book again and again. 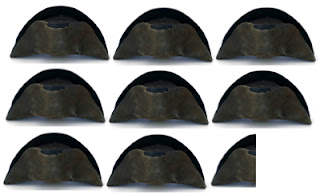