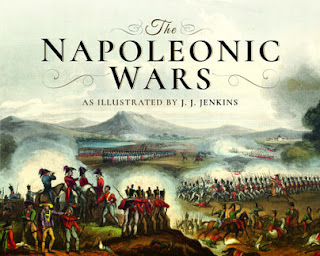 “Originally published as Martial Achievements of Great Britain and Her Allies From 1799 to 1815, … . The text is pure British propaganda but is overshadowed by the rarity of the artwork.” So reads the publisher’s abstract. ‘ A selection from the book’s ‘prologue, describing a vignette, serves to illustrate;


Represents a rendezvous of those Powers who were engaged in the grand struggle for the independence of nations. A British soldier, in pointing to the Military Achievements of Great Britain and her Allies, alludes to the active part this country has taken in the deliverance of Europe.At the feet of the British soldier reposes a French Warrior, tired of the repeated and decisive defeats he has at length met with under an illegitimate master. The broken Flag-Staff and the Imperial Eagle inform us, that the power of the once invincible Buonaparte is no more. … 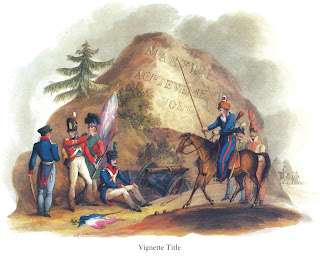 The vignette described above.

While there is no doubting Jenkins’ aim of producing a  tribute to Britain’s ‘glorious martial forces’, the book is far more than the pure propaganda piece that it appears to be at first glance.

It contains 53 images, including the vignette, plus a representation of the coat of arms of the 33rd Foot (Wellington’s regiment) inside the front cover (the 1815 publication was dedicated to the Duke). This Pen & Sword reprint is subtitled “As illustrated by J. J. Jenkins”, but the artwork was, in fact, painted by William Heath (1794–1840), as referenced here, here and here to accompany Jenkins’ text.

Heath’s plates are stunningly reproduced in colour, with each printed on a single page, and they reward careful examination. One would not rely on them for historical accuracy, details of terrain and certainly not for uniform details, but they present, in a stylised form, key events and terrain features in each of the battles. Many also include details in the foreground, such as wounded, dead or dying soldiers, skirmishers, officers or Spanish irregulars.

I had only seen two or three of the paintings prior to reviewing this book. A feature that stood out to me, and one that is common to nearly all of them, is the representation of the chaos, violence, destruction and death associated with battle. Most troops in the majority of the plates are represented in formation, with only the key details of their uniforms presented. This was edifying from a wargaming perspective, where, despite trying (or succeeding) to paint small uniform details, it is the overall effect that is most important to achieve. 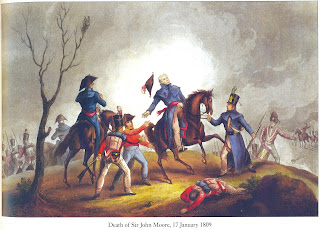 The death of Sir John Moore at Coruña; one of the few paintings that I had seen prior to reviewing this book.

Following the opening vignette is a beautiful drawing of Wellington. Unlike most representations which show him in simple, field dress, Heath has him in full dress with full honours. It makes for a powerful image, which was no doubt as Jenkins intended to have represented “Marquis Douro, Viscount Wellington of Talavera and of Wellington, and Baron Douro of Wellesley; …” (his full description runs to 14 lines!). 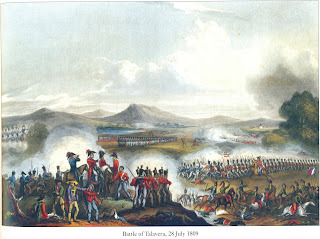 The Battle of Talavera. Note the Spanish irregulars in the foreground. The Spanish regulars are mentioned in the text, but not shown in the painting. 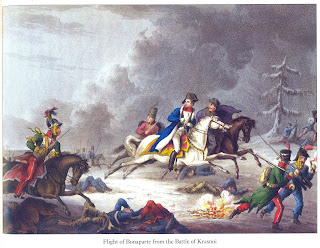 The flight of Napoleon after Krasnoi—a fanciful representation.

The vast majority of the plates relate to battles involving British troops. Three of them illustrate disasters from the Russian campaign and another three scenes from the Battle of Leipsic [Leipzig]. The book concludes with a section entitled “The Battles of Quatre Bras and Waterloo, 16 and 18 June 1815” which features a painting of Quatre Bras and two of Waterloo (Ligny is described in some detail in the text). 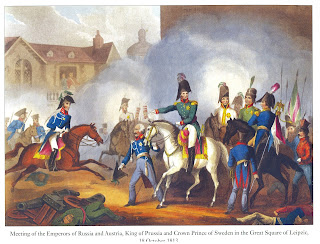 The meeting of the Allied monarchs after Leipzig. An example of some of the fine detail in the paintings. The Battle of Waterloo. This painting is an example of the representation of the chaos, violence, destruction and death associated with battle.

While the artwork is a visual feature of the book, the text makes for interesting reading with details and snippets relating to each battle; along with statements like “…most brilliant examples of cool intrepidity…”, “…the operations were successful and splendid” and “…fresh proofs of the superior prowess of British troops”!

A page or more of text accompanies each painting. Jenkins provides a description of the aspects of the battle represented in the illustration, overview of events during the battle or associated campaign (highlighting the British military achievements) and reproduction of the British general’s dispatch, a speech in parliament or other correspondence relating to the battle. At the end of each description is a list of officers killed or wounded in the battle.

The book itself has been beautifully presented by Pen & Sword. It is printed on heavy, gloss stock so that the paintings are clear, bright and colourful. The text is clear with a moderately-large typeface used throughout and clear distinction between Jenkins’ prose and his reproduction of dispatches and other correspondence.

This is a beautiful book to grace your coffee table, or to add to the bookshelves of your collection. While the text may cause you to puff out your chest in jingoistic British pride, to go slightly red-faced, to simply shake your head, or even feel a little queasy, there is much to recommend. 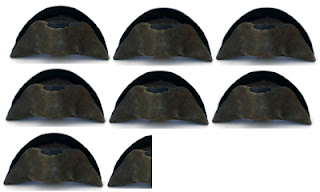